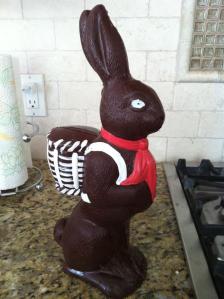 This thing is anything but Little! An obnoxiously large, hollow, chocolate bunny, which I made in class has been the topic of many conversations in my home. Most of which consist of “When are we going to eat that thing?”

While it was fun to make & the kids love it, I have no idea what to do with it. Perhaps, it’s inevitable fate of being eaten should occur sooner rather than later. But for now, I’m still admiring it 🙂

Love to Cook, Love to Eat, Love to Share it all!