This was my 1st attempt in making a Red Velvet cake & I think this recipe did the job!

*Note: if your buttermilk is not a room temp, your batter will look curdled. Heat in microwave for a few seconds if you need to.

Using a standing mixer, mix the dry ingredients into the wet ingredients until just combined and a smooth batter is formed.

Pour cake batter in cake pan(s). Place the pan(s) & bake. Rotate the pan(s) halfway through the cooking, until the cake pulls away from the side of the pans, and a toothpick inserted in the center of the cakes comes out clean, about 30 minutes.
*Note: Since I used a Regular sized Bundt Cake pan, my cooking time was closer to 45 min – 1 hour.

Remove the cake from the oven and run a knife around the edges to loosen them from the sides of the pans. Invert the cake onto a plate and then re-invert them onto a cooling rack, rounded-sides up. Let cool completely.
*Note: Since a bundt cake pan is a lot deeper than other cake pans, you should let the cake cool a bit before trying to remove it from the pan. Removing the cake too soon will cause the top of the cake to tear apart from the bottom. This is not a problem if you plan on icing the cake, but will is a HUGE problem if you plan to just ice the top like most bundt cakes.

With 3 kids, I’d have to say that I’ve done a few birthday parties here & there. But, this one is definitely one of my Favorites!!!

Invitations:
These invitations were super easy to make & gave a good feel for the Indiana Jones Theme. 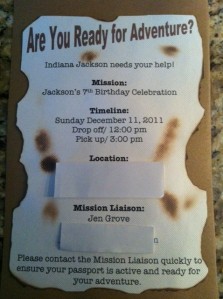 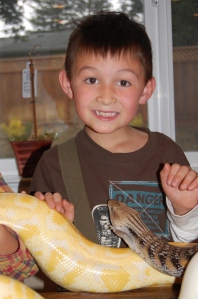 The snake guy we hired was absolutely AMAZING! Despite the fact that a gigantic lizard pooped all over my dining table multiple times, I was very pleased.

Although I am far from a reptile lover, I couldn’t be happier with the look on my son’s face while holding all of the different snakes & lizards. 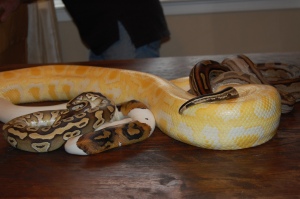 Activities:
Before the reptile show began, the kids were put on a Mission. The Mission to find their Bravery! One must be brave to handle snakes & lizards 🙂

We had 4 tasks to complete in order to accomplish our Mission of Bravery.
1. Mission Funding: Searched for gold coins, which were spread out all over our backyard grass.
2. Diamond Quest: What Indiana Jones Mission didn’t include diamonds? NONE! The kids had to dig for over sized diamonds in a large bin of sand. This became a big hit when we had about 30 minutes to kill before the snake guy came. A handful of kids would dig up all of the extra diamonds, bury them again & repeat. Great Fun!
3. Key of Bravery: One must “unlock” their bravery inside in order to conquer the snakes. Each kid had to stick their hand in the Treasure Chest and pull out a key. The Treasure Chest (piñata) was full of cooked spaghetti & keys from the scrapbook store. 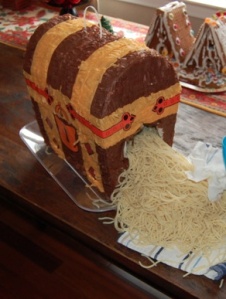 4. Conquer the Snakes: Each kid had to take their new found bravery, run up the slide of our playground & conquer a rubber snake. Who knew allowing the kids to run up the slide would be such a big hit.

When the kids first arrived, they were given their own Indiana Jones satchel. This is where they could store all of their new found treasure while completing each task (gold coins, diamonds, key & rubber snake)

My all time favorite detail of every birthday party…The Cake! This snake cake was so fun to make. I decided to make it a Red Velvet cake as my son wanted the insides to look like blood. Of course! Do you expect anything less from a 7 year old boy?

The body was made out of 2 bundt cakes, which were cut & arranged to make the curve of the body. We are a cream cheese frosting kind of family, so that is what I used. However, doing so did make the icing a bit softer then if I used something a bit more stiff.

Although this cake was super cute, it was A LOT of cake! We had a ton left over, which was a bonus for the birthday boy.

So there you have it… Another year, another kid older, more happy memories!

Love to Cook, Love to Eat, Love to Share it all!